To be honest, we had to look up Tutka Bay on the map. FYI: it’s in Alaska.

That said, it was with pleasure that we did so. For when “The Tutka Bay Lodge Cookbook” came across our desk and we started flipping through the pages of this wonderful tome, we knew that not only did we want to know more about it, but we also needed to find a way to get its authors, the mother/daughter culinary team of Kirsten and Mandy Dixon, on our show.

Daniel Boulud may not know it, but he is responsible for our marriage. Well, at least in part. Here’s the skinny:

After meeting Melanie at a dinner party thrown by my ex-girlfriend (long story) and vowing to stay in touch, we got together for our first date in February 2003. It went something like this:

Melanie: “I have to go to an event at the Gourmet Magazine Kitchen for a wine client, why don’t you meet me there and we’ll go out to dinner afterwards?”

So, I met her at the event and while she worked her magic with her clients I proceeded to taste some wines (FYI: they were Spanish wines) and meet some of her colleagues, all of which was new to me, as I, at that point, didn’t really have any idea about what she did or who any of these folks were.

Eventually, the event wound down, and our time to go to dinner arrived. Melanie asked what I’d like to do, and since I had been at a wine event in a food magazine’s corporate kitchen (no lack of beverages and hors d’oeuvres there), I responded that “since we’d been already eating and drinking, why don’t we do something easy, like go grab a burger somewhere and talk.”

Well, Melanie thought that was a great idea. “I have just the place in mind,” she said, “and it’s right around the corner.”

She then proceeded to lead me to a place on 44th Street called DB Bistro, owned by a chef named Daniel Boulud, someone I’d never heard of. “He makes a great burger,” she said, “you’ll just love it.”

Restaurants will score well this week starting with Super Bowl Sunday February 7 and ending with Valentine’s Day February 14 with Chinese New Year (starts Feb. 8) and Mardi Gras (culminating Feb. 9) in between. A few statistics we found:

Mardi Gras generates $850 million annually for the City of New Orleans. 500,00 King Cakes will be sold and 50,000 shipped out of state. Source: New Orleans CVB

Valentine’s Day is the second most popular holiday for dining out after Mother’s Day with one-quarter of Americans making reservations. 31% of adults favor restaurant gift cards as Valentine’s Day gifts.Source: National Restaurant Association (2/3/2013).

For grape-based brandies, Cognac and Armagnac rule the roost. Both are made in the Southwestern part of the country, below Bordeaux.

While Cognac, made in the region of the same name, is probably the best known – and certainly most widely distributed – of France’s spirits, it is Armagnac, made south of Cognac in the gastronomically rich region of Gascony, which is the spirit considered by many to be the heart and soul of France’s brandies.

They’re both brandies made from grapes, so they must be similar, right? Not even close.

While Cognac for all intents and purposes is a well-oiled machine, with vast regulations, large corporate structure, and aging/labeling requirements that – for the most part – breed similarity between producers and brands; Armagnac, by contrast, is more like the little engine that could: a fiercely individualistic, sometimes forgotten, always appreciated spirit made by a handful of dedicated producers for whom the art of coaxing brandy from the vineyard’s ether is as integral to their regional identity as their exceptional culinary heritage. 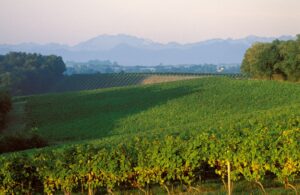 Armagnac the region is divided into three sub zones: Bas Armagnac, Armagnac –Ténarèze, and Haut Armagnac. All make the spirit Armagnac, and most are created using a blend of grapes. The main grape varietals, all white, used in its production include Ugni Blanc, Folle Blanche, Colombard, and Baco (22A), and while the majority of these grapes are also used to produce Cognac, it is the distillation that helps make Armagnac so unique, and individual.

For unlike Cognac production which favors the use of Pot Stills and double distillation, Armagnac production employs using Column Stills and is distilled only once, leaving a new-make brandy (Eau de Vie) with more fruit character and fragrance than those of Cognac. Distilling once also leaves it a little rougher. Not a bad thing, though, as aging in oak alleviates that roughness over time, and brings out the subtleties and nuanced flavors of spice and dried fruit that make Armagnac so beloved.

Interestingly, much of Armagnac production is done employing the use of portable roaming stills that are taken from producer to producer, even those with their own stills, which often go unused. The idea behind this is that since getting the right spirit out of a still requires knowing how to work with it to create a preferred flavor profile, it makes more sense to let the person who “knows the still” make the product. One would think that this would make for a more homogenous product across the board, but it does the opposite, as it allows the process to be micro-tweaked to conform to a particular producer’s specific recipe. Which, in turn, helps make for much more individual end products.

So, what makes Armagnac worth searching out? Well, first: Armagnac is the oldest distillation of France, with records dating back to the 1300’s of brandy being made in the region. So, you’re drinking the history of France. Second: Armagnac is for the most part, very small production, with some producers making as little as 4000 bottles annually. So, you’re drinking someone’s handmade effort, more often than not from a family recipe that’s been passed down over many generations. Third: Armagnac producers don’t just use their vintage production to make the more readily available categorized blended brandies they sell (VSOP, XO, etc), they also bottle vintage Armagnac, which can be some of the most interesting (and costly) spirits you’ll ever try. So, you can, with some searching, probably own a bottle of Armagnac from your birth year, or even your Great-Grandfather’s birth year for that matter, making for some very interesting and delicious after dinner conversation. – David Ransom

Want to know more about this wonderful spirit? Tune in to The Connected Table LIVE! on Wednesday February 3 at 2:00p.m. We’ll be talking with In the Grape’s May Matta-Aliah, one of the country’s top wine educators, who is also the American Ambassador for the AOC Armagnac.