The role of food as a cultural identity and brand builder for a country, how food can be used as both a weapon of war and vehicle for peace, and how ethical cooking and a borderless kitchen factor into international relations were among the topics addressed in a presentation by Dr. Johanna Mendelson Forman.

With more than two decades of experience in the international arena, working on post-conflict transition and democratization issues, Johanna holds a wealth of expertise and insights into the role of food in driving conflict and connecting people and communities. An Adjunct Professor at American University’s School of International Service where she teaches Conflict Cuisine®: An Introduction to War and Peace Around the Dinner Table, Johanna encourages new ways of looking at diplomacy, conflict resolution, and civic engagement.  She is also a Senior Adviser at the Stimson Center where she directs the Food Security program.

Johanna has written extensively about food and conflict, and topics related to Latin America. Her work has been published in a wide-range of publications including, the Miami Herald, Washington Post, Americas Quarterly, The Globalist, VOXXI, Estadao, El Universal, and World Politics Review, and has been cited in NPR’s The Salt, LeFigaro, Salon, and Italia Oggi, and This Week. She has lectured on food related topics at the Smithsonian Resident Associates Program, Johns Hopkins University Bologna Campus, New York University’s Washington Program, and at the United States Pavilion at the 2015 World Expo in Milan, Italy.  She also writes a column on conflict cuisines for the DCist, a local Washington blog post. 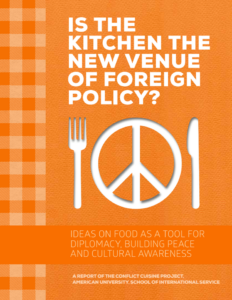 Listen to our show November 2 show with Johanna Mendelson Forman: