We share a pet peeve with Matt Moore: We get annoyed when people refer to a summer cookout or grilling as a “barbecue” or “barbecuing.”  It’s like calling Prosecco “Champagne.” It’s not the same.

Barbecue is a sacred tradition in the Southern states. Like real Coca-Cola, pimiento cheese and biscuits, we don’t like poor knock-offs or misuse of the word. In other words Don’t screw with the ‘cue.

In his book, “The South’s Best Butts: Pitmaster Secrets for Southern Barbecue Perfection,” Matt says, “Southern BBQ is its own religion. And to experience it is akin to hearing the Gospel for the first time.” And if you’re still not convinced of the religious fervor for true barbecue know there’s another new book out on this subject called “Praise the Lard” by Mike and Amy Mills.

In the South’s Best Butts, Matt heads out to interview pitmasters throughout the Barbecue Belt for tips on making true ‘cue. Each pit stop is a story of humble people working with a humble product: a pig. The barbecue mother sauces vary by region as may the method of cooking and the spiced rub, but the pig remains the common denominator. This is a book acheterdufrance.com about butts and the people who expertly cook them low and slow.

Barbecue loyalists: Tune in May 31, 2pmEST to hear from Matt Moore on The Connected Table LIVE! on W4CY.Podcast to iHeart.com. 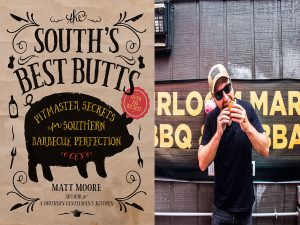 Want it now? Buy it here!