In 2006-2007 David and I spent a blissful pre-wedding-New Years-Birthday-“Bucket List” trip traveling through Botswana and South Africa. It was my first time visiting the African continent, but not the last. In 2012 we went to Morocco to cross “dancing under the stars in the Sahara Desert” off my bucket list.

Our travel bucket list is continually being rearranged and we’re forever dreaming of trips to destinations where the culture, the language, the food and the people are uniquely different and special. One of the places we dream of visiting in Africa is Senegal. Situated on the western coast of Africa, Senegal is a multicultural country with culinary influences from all over the world.   When David and I flew to Johannesburg we made a 4 hour pit stop at the airport in Dakar to fix a hydraulic flap control on the plane. Sadly we couldn’t leave the plane, though they did open the doors so we could stand in the doorway and breathe in the rich West African air.

Senegal, and most of West Africa fascinates me. Much of the United States is tied to that part of Africa for both savory and unsavory reasons. The unsavory was the slave trade when families were uprooted and lives were stolen and human beings sold. The savory are the rich cultural and culinary traditions that the people from Africa brought with them that are embedded in many of the dishes we eat today.

Chef Pierre Thiam grew up in Dakar, surrounded by bright, flavorful ingredients and passionate home cooks. He moved to New York in the late 1980s and began working in a number of restaurants. He steadily rose from an entry level restaurant worker to restaurateur and by 2001 he opened his first restaurant, Yolele, a visionary African bistro in Fort Greene, Brooklyn. His second, Le Grand-Dakar Restaurant, opened in neighboring Clinton Hill. Currently he owns Pierre Thiam Catering, which introduces a diverse, savvy New York clientele to contemporary interpretations of ethnic flavors. He also serves as consulting chef for a number of restaurants in the City and beyond.

Pierre is author of two cookbooks that celebrate the foods of Africa. His debut book, “Yolele!” was the first Senegalese cookbook published in the English language, celebrating the tradition and art of the family meal in Africa. He latest book is “Senegal Modern Senegalese Recipes from the Source to the Bowl” (Lake Isle Press/Sept 15). 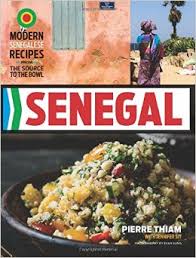