Fresh off his trip to the San Antonio Cocktail Conference, The Connected Table LIVE’s David Ransom connected with two Texas distillers making kick-ass spirits. We invited them on our show January 21.

Randall Metting is often referred to as “The Mayor of The Sweet Life.” His website http://randallmetting.com/ is a go- to resource for anyone who wants to know the ins and outs of red-hot, rockin’ Austin Texas. Randall is also marketing and brand development manager forDulce Vida 100 percent organic tequila. Dulce Vida is handcrafted, 100 percent Navy Strength; it sources its 100% organic agave from the Los Altos highlands in the Tequila region of Mexico. Because of the unique climatic characteristics and the air & soil, this area is well known for producing larger, fruitier agave, ideal for tequila. This organic agave ensures Dulce Vida makes tequila the way tequila has always tasted best: pure and powerful, free of any additives. 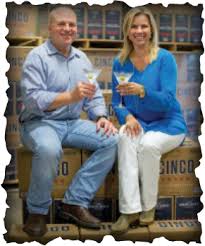 According to Trey (Richard) Azar, founder of Cinco Five Star Vodka , the devil is in the details when it comes to overseeing each batch of his San Antonio-distilled spirit to ensure its clean, clear smoothness. Cinco Vodka starts with gently hand-made from bushels of the finest amber wheat from the Idaho. Using water naturally filtered through the Cordova Creme limestone that lies far beneath the surface of San Antonio, the liquid is distilled five times then blended and filtered in small batches in copper pot stills. Azar calls Cinco Vodka a “martini lovers’ vodka.” Critics have given it a High Five. Cinco Vodka received a gold medal at the Los Angeles International Spirits Competition. As for its Five Star name…..Cinco is a lucky number for Trey and his wife, Kimberly who are parents of five children. Cinco Vodka is his sixth “baby.”

Join Hosts Melanie Young and David Ransom on The Connected Table LIVE! Wednesdays, 2pm ET/11am PT on W4CY Radio and on demand anytime at I Heart Radio, Melanie and David are the Insatiably Curious Culinary Couple who bring you the dynamic people who work front and center and behind the scenes in food, wine, spirits and hospitality.

Our first guest is Lizzie da Trindade-Asher, President of Macchu Pisco, who with her sister, Melanie, have helped share Peru’s national drink with the world. A lawyer by training Lizzie directs the legal, marketing, and importing side of Macchu Pisco and its sister brands, La Diablada and Ñusta Pisco. Melanie oversees production in Peru. Together, Lizzie and Melanie have achieved 30 percent growth annually since founding the company in 2004. “Every day, I am inspired by my sister’s dedication to creating authentic pisco,” says Lizzie, who graduated magna cum laude from Duke University, worked for the 1992 presidential campaign for Bill Clinton, and earned a degree with honors from Harvard Law School.

Their pisco is an un-aged 80 proof clear spirit derived from a single distillation of fresh fermented grape juice (wine). It takes at least 4 bottles of wine to produce one bottle of pisco. It is from this costly process that an elegant spirit is born, one which most closely captures the essence of the grape. According to Lizzie, pisco is traditionally a sipping spirit. Because denomination rules require no additives whatsoever, pisco can be considered organic and thus should not produce a hangover, the mark of a real pisco.

Lizzie and her sister are active in supporting and improving Peruvian working conditions and women’s rights, as well as Latinas in business and education both in Peru and the U.S. Macchu Pisco established a precedent in Peru to support traditionally underpaid farmers by paying fair wages to the women who harvest their grape crops. They also ensure their socioeconomic goals are met from ground to glass by employing a vertical integration model—the only pisco company to hold such credentials—owning and overseeing each step of the production process. They also formed the Asher-Ezra Scholarship Fund, which provides financial aid to underprivileged Latino children in the Bronx.

Our second guest is Allison Patel, founder and owner of Brenne Single Malt Whisky produced in Cognac region of France. Allison’s professional background combines arts and smarts. As a young girl she was a professional ballerina performing with the Joffrey Ballet in New York City. After retiring from the corps de ballet she worked in national sales and marketing for EXHALE Spa, setting and exceeding sales goals.

Her move from the ballet barre world to the cocktail bar world is just another sign of her entrepreneurial spirit. Traveling in France pursuing her passion for good food and drink and blogging about whiskey for pleasure at www.whiskeywoman.com, she discovered a single malt whiskey being produced from grapes in the Cognac region of France. Fond of fine whiskeys from lesser known areas, Alison’s interest was piqued. She researched the potential to import smaller production “world whiskies” to the U.S. eventually establishing an import/export company to focus on this category of distilled spirits.

Brenne (rhymes with men) is produced by a third generation cognac producer who was growing estate barley as well as grapes. The cognac was matured in French Limousin oak barrels imparting a smooth taste and fruit forward notes that captured Allison’s attention. Her talent for persuasion and sales helped Allison strike a deal with the producer who had only producing this special cognac whiskey for the family. Over a three and a half year period she refined the process with the producer finishing the spirit in XO cognac barrels after five – six years aging in the Limousin oak ones. The result is smooth, aromatic, spicy yet mellow and unlike any other whiskey we’ve tasted.

Allison was named one of the Top 10 Women in Whisky by Drinks Business Magazine and awarded Highly Commended in the Icon of Whisky award for Brand Innovator of the Year for 2014.

The Connected Table Live airs live Wednesdays at 2 p.m. ET/11a.m. PT on W4CY Radio http://www.W4CY.com. The show is available on demand at www.iHeartRadio.com and everywhere the iHeartRadio app is available under the Shows & Personalities section.