Born and raised in Buenos Aires, Argentina, Delia Viader has a Ph.D in Philosophy from the Sorbonne, studied business at M.I.T., enology at U.C. Davis and speaks six languages. Her parents ran in global business and diplomatic circles. Her late father, Walter, was her inspiration and staunchest supporter when she decided to establish Viader Vineyards & Winery in Napa Valley in 1986.

Determined to find a home, build a business and establish a secure future for her family of four children as a single mother, she invested in remote, rocky land on Howell Mountain to build Viader Vineyards & Winery to produce small lot Bordeaux red blends. She consulted with leading oenologists and viticultural specialists Michell Rolland and Tony Soter. Viader’s first bottled vintage was 1989 with just 1200 cases. In 2000, Viader’s 1997 vintage was named #2 in The Wine Spectator Top 100 wines. The following year, Viader’s 1998 red blend was ranked #3.

The national recognition for her limited production wines created significant demand and offered a bright future for Viader. But in 2005, an offsite wine warehouse fire set by an arsonist wiped out Viader’s entire 2003 vintage and caused irreparable damage. Viader, along with many other wineries who warehoused their wines in the same facility were dealt a devastating blow.

Determined not to give up, Delia and her family dug in their heels and worked hard to salvage their losses and pivot (we know that word well these days). To help finance the recovery, Viader had to sell Il Masseto, her property in Bolgheri that she had acquired in 1999 to produce Super Tuscan wines and eventually retire to.

Many have shared that Delia is a fearless force of nature who is loyal to the core. The words, “Nevertheless, She Persisted” have never been truer. Now celebrating 35 years with a focus on maintaining standards of quality, sustainability and legacy. www.viader.com 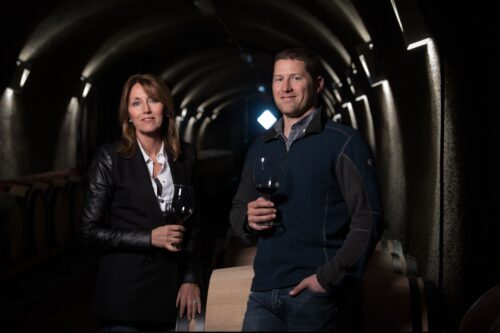 Listen to our show with Delia Viader and son and fellow winemaker, Alan Viader on The Connected Table Live to share their inspiring story and vision.