Normally, we are not Cocktail Lounge Lizards. My idea of bellying up to a bar is heading to a barre class. I am more l downward dog than hair of a dog when it comes to recovering from a night out imbibing. But, who can resist an invitation to check out the swanky new cocktail lounge at one of NYC’s hottest restaurant openings, The Pool Room at the former Four Seasons Restaurant? The place is hopping with a mosaic of New York’s stylish deal makers, debutantes and downtown-heads-uptown types.

And we know why. Director of Bar Operations Thomas Waugh makes cocktails that build on a single ingredient without overdoing it. The cocktails are based on a vegetable, fruit, spice or herb, and then he layers. Cucumbers, tomatoes, watermelon, chamomile and cinnamon are just a few examples. Of course Thomas switches it up with the seasons, so who knows what may be up his bar sleeve next. 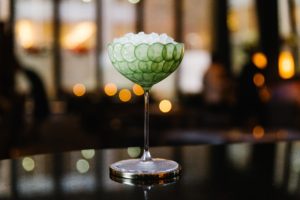 Originally destined for culinary school, Thomas caught the bartending bug working at Harry Denton’s Starlight Room in San Francisco as a means to earn money for school. His industry mentors, Jacques Bezuidenhout and Marcovaldo Dionysos, taught Thomas to mix his culinary inclinations into his drinks.  Prior to joining Major Food Group, which owns The Pool Room restaurant & lounge among many other NYC restaurants,Thomas was Head Bartender at Death & Co.

Listen to our show with Thomas Waugh, The Pool Room Lounge on iHeart.com. Click image below.