While many industry followers quiver with anticipation for The James Beard Foundation’s announcement of its Restaurant, Book and Media Award Finalists (LINK). I have a soft spot for the less flashy Who’s Who of Food & Beverage in America. 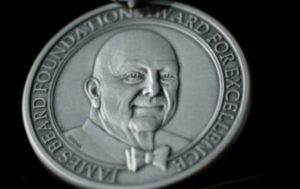 This program pre-dates The James Beard Foundation, and I would like to shed a little light on its origins. The creators of the Who’s Who of Cooking in America (the original name) were Chris Kimball, founder, publisher and managing editor for Cook’s Magazine (the original one started in 1980 and later Cook’s Illustrated) and Jeffrey Berlind, at the time managing editor for Restaurant Business Magazine. For some reason Jeff’s name as co-founder gets omitted, and I know if he is reading this he will appreciate the shout out.

The program was started in 1984 to recognize leaders in all areas of food, beverage and hospitality. There were a few dozen original inductees including the late James Beard who also died the same year. I became involved in the Who’s Who of Cooking in America as a consultant in 1987. My role was to write short biographies for every Who’s Who member and handle publicity for the announcement of the new Who’s Who. I can thank Jane Freiman, a contributing editor for Cook’s Magazine, for introducing me to Chris and Jeff.

Initially, Chris asked me to write short biographies for all the current Who’s Who members and generate some publicity for the program. In 1988 he asked me to produce the event. In 1989, The Bonnier Group, owners of Cook’s Magazine, decided to close the publicaton. That was almost the end of the Who’s Who in Cooking in America. I worked with the owners to try to find a buyer for the Who’s Who. We approached the food magazines, Food & Wine, Bon Appetit, Gourmet, and credit card companies. But it was Peter Kump, the founder of The James Beard Foundation, who called me to say, “Let’s bring back the Who’s Who of Cooking.” Peter had been inducted into the Who’s Who in 1988. A deal was negotiated in 1990, and in 1991, the program was reinstated under the newly lanched James Beard Foundation Awards. The rest is history.

I’ve always felt this program deserves a bigger spotlight. The Who’s Who is a history of the individuals who truly shaped the industry from every aspect. If you ever have the chance to look through complete list you will know what I mean:
https://www.jamesbeard.org/whos-who-of-food-and-beverage-in-america-members

Listen to our show with Daniel Johnnes here LINK