Two award winning cookbook authors and journalists who both bring their style of taste to all they do will be our guests on The Connected Table LIVE! December 10, 2pm ET/ 11am PT.

She is the first Latin American woman chef to have been invited to be a guest chef at The White House to cook during National Hispanic Heritage Month. Restaurateur and award winning cookbook author,Maricel Presilla is a culinary historian specializing in the foods of Latin America and Spain. .Maricel is author of The James Beard Award 2013 Cookbook of the Year Gran Cocina Latina: The Food of Latin America(W.W. Norton), an expansive book which also received a 2013 IACP Best General Book Award. Gran Cocina LatinaShe is owner of two restaurants in Hoboken, NJ: Cucharamama and Zafra, as well as Ultramarinos, a Latin American marketplace, bakery and chocolate shop.

Born in Santiago de Cuba, Maricel holds a doctorate in medieval Spanish history from New York University and has received formal training in cultural anthropology. She has done considerable research on Latin American agriculture – with special emphasis on tropical crops, cacao and vanilla agriculture, and chocolate production. She is the president of Gran Cacao Company a Latin American food research and marketing company that specializes in the sale of premium cacao beans from Latin America. She is author The New Taste of Chocolate: A Cultural and Natural History of Chocolate with Recipes (Ten Speed Press, 2001). She has led numerous trips to the cacao growing regions of Venezuela and has written three illustrated books for Henry Holt that explore the indigenous cultures and cuisines of Latin America.

She writes a weekly food column for the Miami Herald. Two of her articles for Saveur magazine were nominated for James Beard Foundation Journalism Awards. In 2012 The James Beard Foundation named her Best Mid-Atlantic Chef. The Foundation in 2012 appointed her chairman of the newly created Felipe Rojas-Lombardi Memorial Scholarship. Maricel also serves on the advisory committee for the Culinary Institute of America’s San Antonio Campus.

He encouraged us to rethink pairing red wine with fish and helped us explore the pleasures of the palate and good taste through his cookbooks, articles and award winning popular newsletter The Rosengarten Report.

David Rosengarten has been in the frontlines of the food industry for over 25 years as a journalist, television personality and cookbook author, He has written hundreds of articles and contributed as many original recipes to publications including Gourmet (where he was restaurant critic from 1996-2000), The New York Times, Food & Wine, Bon Appétit, Harper’s Bazaar, Departures, The Wine Spectator and Newsday.

David perhaps may be best known for his work as the host of “Taste,” the award winning Food Network television show devoted to the principles of good taste in food and wine. David appeared on more than 2500 shows on Food Network and has been featured on a variety of other shows and networks, most notable NBC where he has regularly appeared on“The Today Show.” He appeared as a judge on the new season of “Iron Chef America” in 2012.

This month David will relauch The Rosengarten Report after a hiatus. Like its predecessor the newRosengarten Report will chock full of tasty morsels of information from David’s greatest meals of 2014 to an in depth look at 25 stellar food products imported from Italy to a search for true Vindaloo, pitting two chefs against each other to prepare their renditions of this popular Indian dish. The new Rosengarten Report pops with David’s special inquisitive, intelligent insights on food and drink. 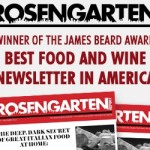 The Connected Table LIVE! Hosts Melanie Young and David Ransom are the Insatiably Curious Culinary Couple who bring you the dynamic people who work front and center and behind the scenes in food, wine, spirits and hospitality. Join them Wednesdays 2pm ET/11am PT on W4CY and download their shows on demand on I Heart Radio under Shows and Personalities.