During this particularly harsh winter one dish has sustained us….soup. We’ve raided our larder and pantry to create different soups when we can’t leave our icy driveway. Our go-to book has been Joanna Pruess‘ recently published Soup for Two: Small-Batch Recipes for One, Two, or a Few. The recipes are easy enough for Melanie with plenty of vegetarian options and substantial enough for David. Somehow we’ve managed to stretch several of Joanna’s “soup for two” recipes into “soup for two days” by adding more ingredients to a base recipe.

Joanna Pruess is an award-winning food and travel writer who has written extensively for The New York Times Magazine, The Washington Post, Saveur, Fine Cooking, Food & Wine, PBS’ online magazine: NextAvenue.org, and the Associated Press.  She is a regular contributor to Specialty Foods Magazine where she develops recipes for gourmet retailers and fine markets across the country, and writes a column about discovering a country’s culture through its cuisine. She also develops recipes for the some of the nation’s top gourmet product manufacturers. 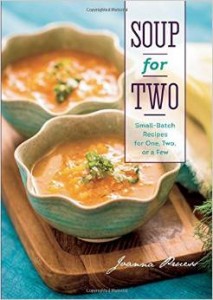 She’s written and published 14 cookbooks. In addition to the aforementioned Soup for Two,  some of Joanna’s other books include; Dos Caminos’ Tacos (with Ivy Stark); The Tea Cookbook; The Cast-Iron Cookbook; and Seduced by Bacon: Recipes and Lore about America’s Favorite Indulgence. And then there’s Seduced by Bacon which has captured David’s fancy.

She created and was the first director of the Cookingstudio, a cooking school within Kings Super Market, in New Jersey, where she had more than 15,000 students in five years. Among her classes were special programs for the visually and hearing-impaired, the learning disabled, as well as historical dinners.

Joanna has also lectured about food and cultural anthropology at the Smithsonian Museum in Washington, D.C., onboard the Crystal Cruises, throughout the U.S., and in Istanbul and Izmir, Turkey.  When we were planning our “bucket list” trip to Morocco in 2012, Joanna invited us over to her NYC apartment and shared all her culinary side trips and must-visits from her own excursion.

The other liquids that have helped us maintain both our senses and our sense of humor this winter are hot cups of coffee or espresso and plenty of good wine. Any color or varietal will do depending on the meal we cook, but we are especially partial to a nice Brunello di Montalcino.

Riccardo illy, Chairman of Gruppo illy S.p.A. will join us live from his home in Trieste to discuss his role at the helm of his family’s company as part of our Families in the Business series.

Ricardo’s grandfather, Francesco illy, founded the business in 1933 starting with coffee and chocolate. Back then illy had a farm in Istria near Trieste.  After World War II this part of Italy became Yugoslavia. The real estate was nationalized, and the farm was lost. Francesco illy decided to focus on coffee.

Under Riccardo’s father, the late Ernesto illy, the company introduced illy tea. After 20 years, production of illy tea was discontinued, and the focus remained coffee. Today, illy coffee is enjoyed in 140 countries around the world in restaurants, at home and in more than 200 espressamente illy coffee bar locations.

The illy  family remains deeply involved in company leadership. Riccardo joined the family firm in 1977 working his way through marketing, sales and upper management positions. He was named Managing Director in 1992, Vice President in 1995 and Chairman of Gruppo illy in 2004, a position he has held since.

Under Riccardo’s direction, illy has expanded back into food as well as wine through acquisitions that include chocolate (Domori) tea (Dammann Frères), fruit preserves and confections (Agrimontana) and wine (Mastrojanni). The latter is an acclaimed Brunello di Montalcino started by the Mastrojanni family in the late 1970s and acquired by the illy family in 2008.

In addition to working within his family business, Riccardo has been active in many other areas of business, community and politics in Italy, as well as serving as a journalist and writing books. He has received numerous honors for his community service.

Join Melanie Young and David Ransom Wednesdays, 2pm ET/11 am PT on the Connected Table LIVE! Each week this Insatiably Curious Culinary Couple profiles the dynamic people who work front and center and behind the scenes in food, wine, spirits and hospitality, Listen live at www.W4CY.com and on demand any time at iHeart.com (under Shows & Personalities). Have questions about our show or want to us to ask a question to one of our guests? Please email: melanie@www.theconnectedtable.com 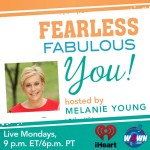 You can also listen to Melanie Mondays, 9pm ET/6pm PT on Fearless Fabulous You!, her inspiring show for and about women, on W4CY’s sister station W4WN- the Women for Women Network, and on demand any time at iHeart.com